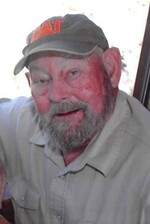 Toppie was born on September 2, 1951 in Clovis, NM to Zeno and Naoma Chandler Crosswhite. He grew up in Clovis active in farming and ranching and was involved in 4H shows, including several championships. He met Alice “Sunny” Breckon in Hobbs, NM and married the love of his life on September 18, 1976.

Toppie learned welding at an early age and became a master welder, able to build anything out of metal. He was also an avid diesel mechanic and heavy equipment operator for numerous years. Toppie was skilled as a mechanic, welder, and machinist and also talented at landscaping. He was able to take any yard and transform it into a manicured lawn. He worked as the Hobbs schools grounds supervisor for many years, greatly improving the school grounds, including the high school football fields.

Toppie was a member of Temple Baptist Church in Hobbs and a member of the NRA. He was also a member of Hobbs Band Boosters, working closely with the high school band, and an honorary member of Hobbs FFA. He loved helping others and teaching others his many skills. Toppie adored his family, especially his four granddaughters, whom he loved cheering on at their activities whether he was able to be there or not.
He was preceded in death by his parents and grandparents.

The family suggests memorials be made to the Arthritis Foundation, www.arthritis.org.