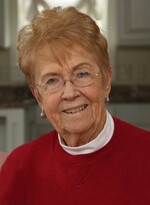 Mildred Cannon, 89, of Canyon, who was residing in Houston near family the past 18 months, passed away peacefully on Thursday, March 4, 2021 at her home in Houston surrounded by family. Planning is underway for a memorial service in Canyon, TX on or around her birthday of 8 May.

She graduated from McLean High School in 1948 and the Lubbock Memorial Hospital School of Nursing in 1951. Up until her retirement in 1999, Mildred spent her adult life working as a registered nurse, primarily for two physicians. She was the nurse for Dr. Norman Monk in Lubbock, TX for over 20 years from shortly after her certification as a registered nurse until she moved to Canyon in 1975. After a brief stint working for Dr. Leta Boswell in Canyon, she worked for Dr. Robert Gross for close to 30 years until her retirement.

Mildred loved playing golf and lived beside the 17th green on the Palo Duro Creek Golf Club in Canyon with her golf cart taking up half her garage. She played many times each week usually with her ‘lunch bunch’ of Ruby Bonds, Beth Ramsey, and Helen Friedell. Mildred is the only known member of her family to ever win a golfing championship trophy as she was crowned the Hunsley Hills Ladies Champion one year. She enjoyed travelling with the ‘Golden Girls’, playing Bridge and visiting with friends and neighbors, particularly while sitting on her back porch watching the golfers play by. Mildred was a member of the First United Methodist Church in Canyon.

Mildred was born on May 8, 1931 in McLean, Texas to James Clyde and Mary (Stewart) Holloway. She was preceded in death by her parents and her sister and brother-in-law, Elsie and Bill Earles. Survivors include two sons, Michael Cannon and wife, Debbye of South Jordan, Utah and Patrick Cannon and wife, Donna of Houston; four grandchildren, Christopher Cannon, Natalie Malan and husband, David, Elizabeth Hillman and husband, Paul, and Daniel Cannon and wife, Alyssa; seven great grandchildren, Penny, Emmitt, Calvin, Alice, Alexis, Paul Thomas, and Abigail; and one sister, Mary Hinson and husband, Powell of San Marcos.