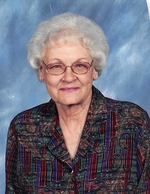 Graveside services will be held at 2:00 PM Wednesday, March 23, 2022 at Ochiltree County Cemetery in Perryton, Texas with Bill McCallie, officiating. The family will receive friends on Tuesday, March 22, 2022 from 6:00 to 7:00 PM at Brooks Chapel in Canyon, Texas.

Mattie was born April 10, 1932 in Mobeetie, Texas to Chalmer and Bessie Corcoran Keeton.

Mattie or Louise, as she was known to many, graduated from Lefors High School in 1950 and attended West Texas State University. She met and married her high school sweetheart Joe W. Ogden on April 24, 1949 in Pampa, Texas. They celebrated their 50th wedding anniversary with family in Amarillo, Texas and her beloved sweetheart died July 25, 1999.
She retired from Perryton ISD in 1987 where she was the secretary at Perryton Junior High for 15 years.

Louise loved sports, especially the Dallas Cowboys, Dallas Mavericks, and the Texas Rangers. The NCAA tournament was her “favorite time of the year” and she spent many an hour watching both men’s and women’s games.

She was preceded in death by her parents and her husband of 50 years, Joe. She is survived by her sons, Joe Keith Ogden and wife Cindy of Perryton, TX, Paul Ogden and wife Sharla of Seminole, TX; her daughter, Ruth Ann Vessels and husband Tim of Canyon, TX; her brother, CH Keeton and wife Barbara of Hale Center, TX; eight grandchildren; and fifteen great grandchildren.

In lieu of flowers, the family suggests memorials be to the Canyon Meals on Wheels, PO Box 57, Umbarger, TX 79091.