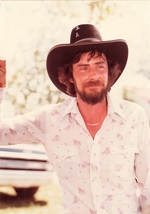 Memorial services will be at 10:00 A.M. on Friday, April 2, 2021 at Brooks Chapel in Canyon with Pastor Steve Belote, officiating. Burial will follow in Dreamland Cemetery.

Larry was born on July 20, 1946 in Clovis, New Mexico to Robert Linza and Lola Rolen. He graduated from Clovis High School in 1964. Larry was a veteran of the US Marines, serving in Vietnam as an ordnance disposal technician. He received a National Defense Service Medal, a Vietnamese Service Medal with 3*, and a Vietnamese Campaign Medal with device.

Larry spent many years putting out pressure-controlled oil fires. He loved riding horses and watching western movies. He always had a motorcycle. He also enjoyed playing pool, dancing, and traveling.