To share your memory on the wall of JuliAnn Lee Brooks Williams, sign in using one of the following options:

Print
JuliAnn Lee Brooks Williams, of Canyon was a loving wife, mother, daughter, sister, granddaughter, aunt, niece, cousin and friend. She was 48 years old when she passed away on May 22, 2020.

Julie is survived by her husband of 24 years, B... Read More
JuliAnn Lee Brooks Williams, of Canyon was a loving wife, mother, daughter, sister, granddaughter, aunt, niece, cousin and friend. She was 48 years old when she passed away on May 22, 2020.

Julie is survived by her husband of 24 years, Byron, and their two sons, Brooks and Parker. She is also survived by her grandfather Clarence Brooks; father and stepmother Gary and Jan Brooks; sisters Michelle Brooks Kalahar and Mackenzie Brooks; in-laws Rudy and Judy Robinson; sisters-in-law Rachelle (Chris) Guerin and Mary (Brad) Kenter. In addition, Julie will be missed by her aunts Clarene Slinkard and June Asendorf; uncle Bryan Taylor; cousins Kristi, Lisa, Teresa, Craig and Alisa; nephews Jack, Colin, Will, Wyatt, Ati and Zen and her nieces Taylor, Madelyn, Remi and Lila. Julie is preceded in death by her mother Eva Taylor Pulliam and her grandmothers Ruby Taylor and Yvonne Brooks.

Born October 31, 1971 in Whittier, CA, Julie grew up in Palm Springs. She later moved to Texas where she graduated from Newman Smith High School in 1989 and attended The University of Texas at Austin. While at UT, Julie was a member of Kappa Delta Sorority where she met treasured friends who introduced her to Byron. She so captivated him that he has never forgotten that their first date was on August 11, 1992. Julie graduated in 1993 from UT with a B.S. in Radio, Television and Film. After dating for four years, she and Byron married in April of 1997 surrounded by family and friends.

Coming from a media family, it was natural that Julie join the advertising industry and after graduation, she enjoyed working for Austin radio station KGSR. She later found her home as a Media Buyer for Austin advertising agency GSD&M and was incredibly successful working both at their Austin location and later in their Dallas office. Julie truly loved her work.

After Julie and Byron became parents, she realized her true passion was raising their two boys and she left her full-time career to devote all of her time to them. Whether supporting the boys at school or at their sporting events, she was their most enthusiastic cheerleader. Julie loved her family immensely and was incredibly proud of Brooks and Parker.

Julie looked forward to setting up her Department 56 Christmas Village collection each year and loved the holidays so much that she sang Christmas songs to the boys year round in place of lullabies. She had a special fondness for frogs, never missed a chance to go to the beach and enjoyed a bowl of cereal almost as much as she enjoyed a bowl of Blue Bell ice cream served in the biggest mug she could find. Julie adored all animals, including her cats Bullie, Bugsy, and Pepper, and especially loved her yellow labrador, Katie, who became her emotional support animal and was always by her side.

Loved by all who knew her, Julie genuinely cared about others and made any occasion better, lighting up a room with her smile and contagious laugh even as she struggled with emotional health differences. She was very aware of the isolation that inevitably comes with this invisible disease but she fought to stay healthy and through it all, her love of God and her faith in Him stayed firm.

Julie, we will miss your beautiful smile and warm hugs but are comforted knowing that we will see you again. Until then, you are forever loved by those lucky enough to have been a part of your journey here on earth. Rest in peace, sweet Julie.

Due to pandemic concerns, a private memorial service honoring Julie will be held in Plano, Texas.

The family wishes that memorial contributions be made to the charity of your choice or to:
Brain & Behavior Research Foundation
https://donate.bbrfoundation.org/civicrm/contribute/transact?reset=1&id=1
Read Less

To send flowers to the family or plant a tree in memory of JuliAnn Lee Brooks Williams, please visit our Heartfelt Sympathies Store.

Print
Due to pandemic concerns, a private memorial service honoring Julie will be held in Plano, Texas.

We encourage you to share your most beloved memories of JuliAnn Lee Brooks here, so that the family and other loved ones can always see it. You can upload cherished photographs, or share your favorite stories, and can even comment on those shared by others.

Posted Aug 23, 2020 at 05:48pm
I met Julie in college. She was my roommate at the KD house my junior year. Julie was hilarious. She asked if I was a TV person, because she liked to have the TV on all the time. She ate green grapes out of a cup. She sometimes borrowed my lipstick without asking. We all loved Julie - she really was that person who could light up a room with her wit and candor. I feel lucky just to have known her.

This is the memorial video for Julie

Posted Jun 09, 2020 at 05:10pm
Julie ALWAYS treated me like part of the family when I would come over with Mary to see the family, hang out for backyard barbecues & trick-or-treat with the boys and the dogs! She was definitely a ray of sunshine every single time! Now she will be that ray of sunshine shining from above. My heart goes out to the whole family, I wish I could give you all a big hug. Please know that I will keep you all in my prayers for peace and comfort.
Comment Share
Share via:
C

Posted Jun 09, 2020 at 02:53pm
John 11: 25-26
Jesus said to her, "I am the resurrection and the life . The one who believes in me will live, even though they die, and whoever ives by beliving in me will never die.
Psalm 73:26
My Flesh and my heart May Fail, but God is the strength of my heart and my portion forever.
I will always remember the time I made Julie laugh at the Palm Springs Mall. Craig.
Comment Share
Share via: 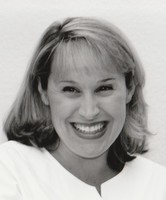