To share your memory on the wall of Jerry Miller, sign in using one of the following options:

Jerry was born on February 15, 1939 to Anton and Imogene Miller, first generation German Americans. He grew up in Cego, a very small rural town in central Texas (just south of Waco). He attended Chilton High School where he was a star football player, at least as he remembered it. He attended the University of North Texas, where he met and married his beautiful wife, Margaret Jeane Kennedy Miller. He received his master’s degree in management and finance from the University of North Texas, and his Ph.D. in finance and accounting at Louisiana State University. Jerry then took a job as an Associate Professor of Business at West Texas State University, and moved his family to Canyon, Texas. Jerry had a successful career at WTA&MU that culminated in him serving as the dean of the College of Business. He was very proud of the students he educated over the years. He told many stories about their successes and followed their careers closely while staying in contact with many of them.

Jerry had a passion for saving and investing that shaped his life and the life of his family. He was notorious for being frugal; his sons did not know that air conditioners for homes or cars were invented until they went off to college, when they also learned that restaurants served beverages other than water. Jerry liked to be the center of attention and was always the life of the party. Many of his friends will never forget his attempts at fashion involving dress socks and Bermuda shorts, and no one that witnessed him dance will ever forget the image. He was an avid golfer and poker player and was an expert stock market analyst. He loved to travel with Jeane and their friends, and his life of frugality allowed them to visit countries all over the world. Jerry lived as full of a life as anyone could or should expect, even to see his beloved LSU Tigers finally defeat Alabama, and go on to win another national championship.

Jerry was preceded in death by his wife, Jeane Miller, and his parents, Anton and Imogene Miller, who both had great senses of humor and were fans of a cartoon about a cat and a mouse. Jerry is survived by his brother J. Tom Miller; his three sons, Mark Miller and his wife Jeralyn of Germantown, TN, Trent Miller and his wife René of Dallas, TX, and Shane Miller of Los Angeles, CA; four grandchildren, Alexandra Miller of New Orleans, LA, Jacob Miller of Germantown, TN, and Jack and Kyle Miller of Dallas, TX.

The family plans to have a private memorial service. In lieu of flowers, donations can be made to the Jerry Miller Scholarship Fund at West Texas A&M University at WTAMU Giving
or to the Dementia Society of America, Dementia Society
Read Less

To send flowers to the family or plant a tree in memory of Jerry Don Miller, please visit our Heartfelt Sympathies Store.

There are no events scheduled. You can still show your support by sending flowers directly to the family, or planting a memorial tree in memory of Jerry Don Miller.
Visit the Heartfelt Sympathies Store

We encourage you to share your most beloved memories of Jerry here, so that the family and other loved ones can always see it. You can upload cherished photographs, or share your favorite stories, and can even comment on those shared by others.

Posted Mar 28, 2020 at 10:56pm
Dr. Miller (Jerry) was my advisor and professor when I earned my MBA way back in the late 1970s to the early 1980s. He was brilliant man, an outstanding professor, and a great friend. My prayers and best wishes to all of you who loved him.
Comment Share
Share via:
S

Thank u for the kind words

Buz and I moved in across the street in 2016 and your father was soon over to greet us to the neighborhood. Much visiting, yard work and tall tales ensued with many laughs and checking in on each other. We truly miss him and his quirky ways. He afforded us some great rocking chair memories. Truly sorry for your loss. Best, Vickie and Buz
Comment Share
Share via:
S

Posted Mar 19, 2020 at 09:47pm
Mark, Trent and Shane,
Thinking of you all at this difficult time and sending hugs and prayers to you all. Your Dad was a Special Man and will be missed by many.
Love,
Leslie Gordon
Comment Share
Share via:
S

Posted Mar 18, 2020 at 11:55am
Mark, Trent, and Shane,
What a legacy your dad left at WTAMU and the community of Canyon! It was great to hear all the stories your mom and dad told about you boys when we were neighbors on Village. Jerry probably owned the original "man cave" with his basement dwelling!! He was so proud of you and his sweet grandchildren! Both of your parents were such a blessing to so many young people. They were dearly loved and will continue to be missed! .....Bob and Barbara Schneider & family
Comment Share
Share via:
S

Thank you 🙏 so much for the kind words ....so glad to hear from you guys, it means a lot in this difficult time
J

Posted Mar 17, 2020 at 08:45pm
Mark, Trent, and Shane the McClure family best wishes and prayers are with you and yours. Hard to believe our families have known each other almost 40 years!! Too many memories to share here but one. I asked a lady I barely knew to attend tour Mother's funeral to meet Jerry because I thought she was special. He "interviewed " her and agreed, gave her one of his coins to keep and told me I better hold on to her so I did. We have been married ever since.I will miss my Dad's best friend and my mentor very much.
Comment Share
Share via:
S 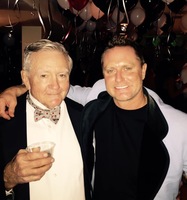