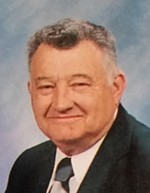 Jerry Buster had one of the greatest days of his life on Dec. 16, 2019, when he met his Redeemer and Lord. Graveside services will be at 11:30 A.M. Monday, December 23, 2019 at Dreamland Cemetery in Canyon with Gene Jones officiating. The family will receive friends on Monday from 10:00 to 11:00 A.M. at Brooks Chapel. Arrangements are by Brooks Funeral Directors of Canyon. He is survived by his wife, Helen Henry Buster, whom he resided with in Rio Rancho, New Mexico. Jerry and Helen had three sons, David Steven Buster (deceased), Daniel Wallace Buster of Tucson, and Duke Alan Buster of Albuquerque. Duke and his wife, Sally, have three wonderful children, Miles, Hailey, and Mariah. Jerry was born in Panhandle, TX, and following the early death of his father, moved to the stock farm of his grandparents (A.L. and Fanny Stevens) in Wayside on the edge of the Palo Duro Canyon. He graduated from Wayside High in 1950, graduated from Texas A&M College in 1954 with a degree in agriculture, was commissioned in the USAF and
earned his wings as a jet fighter pilot in 1955. He met and married Helen (a direct result of some fervent prayer) on the way to his first duty station at Kirkland AFB, NM. The next 20 years of his life included earning an electrical engineering degree from Texas A&M, a tour in Vietnam flying F-100 fighters, a stint as test-director of the SR-71 “Blackbird” Special Project Office, and helping raise his three sons, after retiring from the USAF as a L/Col. In 1974, he earned his law degree from Oklahoma Univ., moved to Belton, TX, where he built a home by the Lampasas River, established a law office, worked for the Waco City Attorney’s Office and later for a defense contractor as corporate attorney and systems engineer. He retired once again, raised a few cows and watched Helen finish her career with Scott and White Hospital in Temple, TX. He and Helen moved to Rio Rancho, NM, in 2005. He lived a full and blessed life. We will miss him, but he always looked forward to his future with the Lord, friends, and family. He will probably get in all the flying time he wants. In lieu of flowers, the family suggests memorials be made to Samaritan's Purse, PO Box 3000, Boone, NC 28607 or online at www.samaritanspurse.org or Shriners Hospitals for Children, PO Box 1525, Ranson, WV 25438 or online at https://donate.lovetotherescue.org .