To share your memory on the wall of Gerald Buster, sign in using one of the following options:

To send flowers to the family or plant a tree in memory of Gerald O. Buster, please visit our Heartfelt Sympathies Store.

We encourage you to share your most beloved memories of Gerald here, so that the family and other loved ones can always see it. You can upload cherished photographs, or share your favorite stories, and can even comment on those shared by others.

Posted Dec 28, 2019 at 12:00am
Hi Buster family. We saw the Obit for Gerald Buster before Christmas in the Temple Daily Telegram and our Camp of Gideons want to express our sympathy for your loss. Gerry was a great participant in the local Gideons Camp for several years and did an excellent job of Church Relations Chairman. Thanks to his efforts many people in the World got a Gideon New Testament and perhaps many have come to know Jesus as their Savior. I know that his last years were a struggle but he sure was a nice guy to know. God Bless Aubrey Brickhouse Temple, Gideons.
Comment Share
Share via:
HS

Posted Dec 21, 2019 at 12:00am
Garden Path Vase was purchased for the family of Gerald O. Buster.   Send Flowers Hailey, Our thoughts and prayers are with you and your family. We love you so much. - Kelsey, Jacinta, Justine, and Chloe
Comment Share
Share via:
RT

Greg, Desiree, and the Rogers Laboratory

Posted Dec 19, 2019 at 12:00am
Balance Easel Spray was purchased for the family of Gerald O. Buster by Greg, Desiree, and the Rogers Laboratory.   Send Flowers We are deeply saddened by the news of Gerald's passing. Our heart felt condolences to you and your family. We are thinking of you during this time. Greg, Desiree, and the Rogers Laboratory
Comment Share
Share via:
CB

Posted Dec 19, 2019 at 12:00am
Balance Easel Spray was purchased for the family of Gerald O. Buster by Charlotte and Nathan Balke .   Send Flowers
Comment Share
Share via: 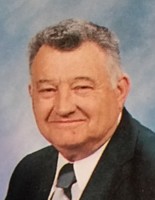