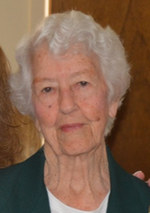 Edna Gibson Huffine, 100 years and 8 months, of Canyon, passed away on Sunday, November 22, 2020. Private graveside services will be held at Memory Gardens Cemetery.

Edna was born on March 23, 1920 in Turkey, Texas to Fletcher and Erma (Pierce) Wynn. She married Clarence Gibson, and he preceded her in death after 52 year of marriage. She later married Pat Huffine who also preceded her in death. Edna was the oldest and longest life standing member of the University Church of Christ in Canyon.