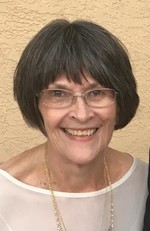 Carole Marie Southworth McSpadden passed into the arms of her Lord and Savior on Tuesday, October 13, 2020 after a battle with Alzheimer’s Disease. Carole was born in Roswell, New Mexico April 23, 1936 to Grady Southworth and Ethel Weaver Southworth. Carole graduated from Roswell High School in 1954 and attended Eastern New Mexico for two years. An often-told story among Carole’s grandchildren was that although she was engaged at the time, Carole met a young man in her English class by the name of Larry McSpadden. Larry’s persistence paid off and they were married September 9, 1956. The granddaughters figured she must have made the right decision since they were happily married for 64 years!

Carole was employed as a secretary of an oil company in Lubbock where her paycheck put Larry through Texas Tech University. His work for Martin Marietta and NASA moved them frequently among California, Colorado, and Texas. By their second transfer to Colorado, Carole stopped working outside the home and spent her days raising their 3 girls. When the family moved to San Marcos, Texas in 1973, Carole was an integral part of opening McSpadden Tax Services where she served as office manager for 25 years.

She was a devoted wife and mother, spending hours carpooling her girls and their friends to various school and church functions. She loved watching sports and could always be found in the stands rooting for the San Marcos Rattlers and the Southwest Texas State Bobcats.

She was an active member of her church, volunteering in the library and teaching Sunday school. She volunteered at the San Marcos Public Library for 20 years. She was a member of Beta Sigma Phi, a local women’s service organization and was awarded Woman of the Year; however, in true Carole fashion, she did not attend because it was the night of the Final 4 Basketball Championships.

As her daughters married and moved away, Carole’s greatest joy became spending time with her grandchildren, traveling frequently to support them in their many activities. In her spare time, she loved reading, participating in Pilates and line dancing, watching Wheel of Fortune, and solving word searches. She could also be found driving to stores all over the Texas Hill Country in search of the newest Beanie Babies for her 7 grandchildren!

Carole was preceded in death by her parents and one sister, Eleanor Southworth SanSoucie of Roswell, New Mexico. Carole is survived by her husband Larry McSpadden of Canyon, Texas and three daughters and their spouses: Kelli and Scott Cook of Ft. Worth, Texas, Keri and Chuck Alexander of Montrose, Colorado, and Kami and Wayne Pack of Canyon, Texas. Grandchildren include Robbie and Lauren Cook, Riley Cook Claxton and husband Colten Claxton, Remington Cook, Mac and Chazlyn Alexander, Blake Alexander and fiancée McCall Chapman, Kellyn Alexander Savage and husband Austin Savage, McKenzie Pack McDaniel and husband Trent McDaniel. Additionally, she is survived by her brother Marvin Southworth of Roswell, New Mexico and niece Christy Murphy of Fort Oglethorpe, Georgia and nephew Mike Murphy of Dallas, Texas.

A private celebration of her life will be held next year. Memorials may be made to the San Marcos Public Library, 625 East Hopkins Street, San Marcos, Texas 78666 or to Conner Place Assisted Living Community, 2 Cottonwood Lane, Canyon, Texas 79015. The family wishes to express their sincerest thanks to Conner Place Assisted Living and Kindred Hospice of Amarillo for the care, love, and compassion shown to Carole and her family. A special thank you also to Brooks Funeral Directors of Canyon, Texas for their assistance and support.