To share your memory on the wall of Arline Rugger, sign in using one of the following options:

Print
Arline Ragle Rugger went to her heavenly home on January 24, 2020. A memorial service will be held on Saturday, February 8, 2020, at 2:00 P.M. at Brooks Chapel. Arrangements are by Brooks Funeral Directors, Canyon, Texas.

Arline was born... Read More
Arline Ragle Rugger went to her heavenly home on January 24, 2020. A memorial service will be held on Saturday, February 8, 2020, at 2:00 P.M. at Brooks Chapel. Arrangements are by Brooks Funeral Directors, Canyon, Texas.

Arline was born to Albert and Anna Ragle on June 19, 1925. She was raised on their farm just outside of Olton, Texas. The youngest in a family of three girls and three boys, Arline worked with her parents and siblings to live through the difficult years of the Dust Bowl and the Great Depression. Because they had been able to pay off their debt in the spring of 1929, her parents kept their farm at a time when many could not. She remembered those years as times of love and good food, often shared with others in greater need.

From her infancy, Arline was faithful in attending and later actively participating in the Methodist Church in Olton. While she was studying at a Methodist college in Abilene, McMurry College, her second brother became a Methodist minister. Rev. Doyle Ragle served as a chaplain during World War II and as a pastor and district superintendent in this area for many years, including at First Methodist Church in Canyon in the late 1950s.

These two defining characteristics were true of Arline for the rest of her life: She was always a Texan and a Methodist. However, she did not always live in Texas. After graduating from McMurry College in 1946, she married Austin Rugger. As a couple, they lived in his home state of Washington and went to seminary together in Illinois. They had four children and served in Methodist churches in Washington, Idaho, and Iowa. Whenever possible, Arline brought a little bit of Texas into the life of communities where she lived. Perhaps most notably, whenever she could have a garden, she grew okra and served fried okra at church potlucks. For most of those northerners, it was their first exposure to that southern delicacy!

Just as Arline was often a Texan living outside of Texas, she was occasionally a Methodist who attended churches other than Methodist churches. She also had friends from other churches. Nonetheless, it was always clear that, while other traditions were good, nothing quite measured up to the Methodist tradition for her. She especially loved the hymns of John and Charles Wesley.

That brings up a third characteristic of Arline: She was a musician. She played the piano, the organ, the cello, and the drums. She also sang soprano. Although she was no longer able to perform much as a musician after she had a massive stroke in her early 30s, she retained the ear and heart of a musician. Church music, classical music, and the music played on The Lawrence Welk Show were her favorites. After she had recovered sufficiently from her stroke, she continued to give piano lessons, especially to beginners. This was a great joy to her, as she was able to encourage a love of music in many children and some adults.

Arline, the Methodist musician from Texas, did make it back to live in Texas in her later years. She lived in Waco, Plainview, and San Antonio, before moving to Canyon in 2010. After a few months of settling in and making good friends, especially in her Sunday School class at First United Methodist Church, she stated, “I feel that I’ve come home!”

Arline was preceded in death by her parents Albert and Anna; her two sisters Mable and Rosalie; her three brothers Ernest, Doyle, and Burney; her husband Austin; her older daughter Rosalie; her younger son Gerald; one niece; and one nephew. She is survived by her older son Albert; her younger daughter Mildred (and husband Warren); grandsons including William (and wife Katja), David (and wife Daisy), and Austin; and much-loved nieces and nephews.

In lieu of flowers, the family suggests that a donation be made to a charity. They especially commend the organizations that gave such wonderful care to Arline during the last eight months of her life: The Ware at Park Central and BSA Hospice of the Southwest.
Read Less

To send flowers to the family or plant a tree in memory of Arline Ragle Rugger, please visit our Heartfelt Sympathies Store.

Receive notifications about information and event scheduling for Arline

We encourage you to share your most beloved memories of Arline here, so that the family and other loved ones can always see it. You can upload cherished photographs, or share your favorite stories, and can even comment on those shared by others. 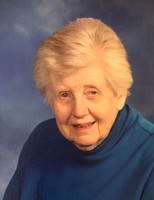